Should I use value receivers or pointer receivers?

Value receivers have some benefits include immutability, concurrent safety and clean logic (not always, often true). But to what extend can I use value receivers without an issue or performance penalty?

Let’s look at rule 1. In many cases, an object needs to be modified by a method after its initialization, but it doesn’t mean the modification has to be done in place, an alternative and often a better way is to get a modified copy of the object, which is usually called a Fluent Interface. Basically it means a method with a value receiver and a return value of the same type. It’s just pure (no side effect) functional programming style under another name.

Then rule 2 tells us to choose based on the struct size, but how big is a big struct? We know that time.Time is 3-words large with value receivers, but how about 4-words, 5-words or bigger structs? To answer this question, I did some benchmarks.

The benchmarks are based on the idea that a type with value receivers would need to implement fluent interface, so it should compare the performance between two fluent methods with value and pointer receivers:

It turned out inlining is critical to the overhead of value copying.

When inlining is disabled (gcflags=-l), for a struct of 1 word, value receiver has the same performance as the pointer receiver, but for structs larger than 2 words, value receivers begin to show more and more overhead. 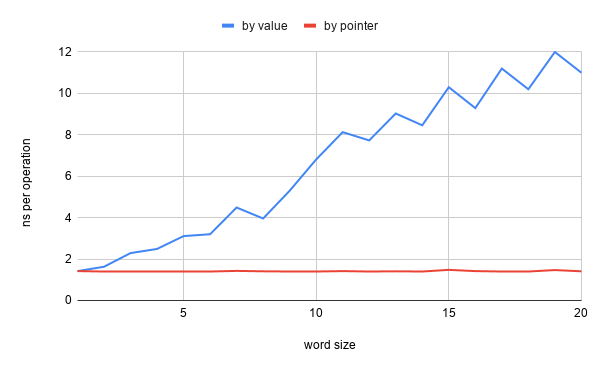 However, when inlining is enabled (the default option), value receivers have almost the same performance as pointer receivers for struct size from 1 up to 9 words! Overhead of value copying starts to rise for structs of 10 words or more. 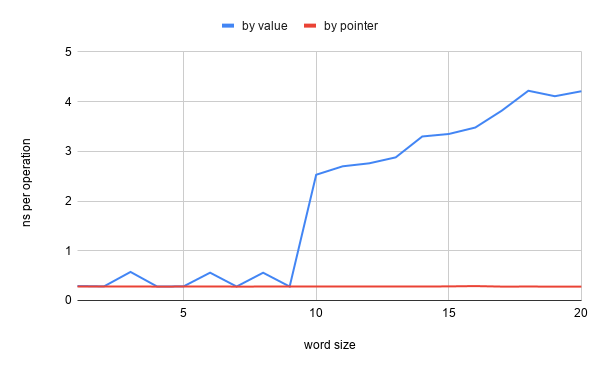 These results were tested on a Macbook Pro with go1.14.3.

From the benchmark results, value receivers should be preferred if the methods are inlined and the struct size is equal to or smaller than 9 words (1 word == 64 bit), but this might not be the end of the story, the more complex a method is, the less likely it is inlined, but also the less proportion the copying overhead to the whole method logic. The overhead of copying from a value receiver might not be significant to the overall running time, so at the end of the day, the choice depends on the frequency of the method calls, the business logic and the performance requirements. When in doubt, benchmark it!

See a[0] changes because slice a and b shares the same underlying array.

JavaScript Surprises to a Go Developer

The scope of var is wrong

Never use var to declare variables, use let instead.

== is conversion and comparison

What you really need is ===, which is similar to comparing two interface{}.

Also this affects map key comparison. So object key is not so useful in JS as struct key in Go. The equality test is always on the references rather than the contents.

const works for objects, but the contents are modifiable

Single and double quotes are the same

Switch cases fall through by default

Use 'property' in obj to check if a property is declared or not.

Only float64 is supported

Promise can be chained and composed

It is quite impressive how JS do concurrency differently and efficiently.

There are two types of generator method syntax

The package provides a mini-framework to address those cross-cutting concerns.

Here is an example illustrating the usage of the goroutine pool and the group. The task is described in the “Google Search 2.0” page from this slide.

The package is built around the concept of a runner.

A correct implementation of a runner should satisify the following conditions:

With goroutine pool and group in the package, the user does not need to use the go statement explicitly, but only needs to implement their objects satisfying the Runner interface.

A Group is useful when multiple concurrent sub-tasks needed to be combined as a single task (the task failed when one of them failed, every sub-task should be cancelled when the task is cancelled).

A Pool is useful when there are many short-lived gorotuines.

Group can be built upon pool, not vice versa.

How to Start Godoc on Mac

And pidof can be installed with Homebrew.

Attach to a session with iTerm2 integration